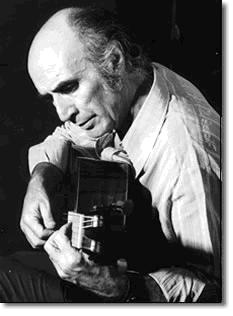 An artist of the guitar. He was born in Vraila of Roumania in 1918 and his parents were from Kefalonia. He is regarded as the rector  of the Greek guitarists and the founder  of the classical guitar in Greece . He is the authentic expression of  the Segovia school, also a student of Segovia himself in the Chigiana Academy in Sienna ( Italy) and in Music en Compostela (Spain).

He appeared in public  as well as  radio and TV recitals in Greece and abroad.  He published methodology books for the guitar and arranged great classical composers and traditional pieces of music as well as songs from various countries.

His rare musicality and his perfect technique have made him known as an artist of international fame.

In Greece he recorded records with works for the classical guitar by classical music composers (Albeniz, F. Sor, Bach et.al) , works by Greek composers such as Theodorakis, Chatzidakis, Mamagakis, G.A Papaioannou, Andriopoulos as well as participations in recordings for the cinema and the discography with the most excellent Greek composers ( Xarchakos, Markopoulos, Plessas, et.al)

His fame  greatly surpassed the Greek borders its culminating moment being Andre Segovia’s statement which classified him among the three best guitarists n the world.

Gerasimos Miliaresis was born in Vraila, in Romania, in 1918. His parents came from the island of Kefalonia. He graduated from the Greek high school of Galatsi , and in 1938 he came to Athens. In 1947 he obtained the guitar diploma and the degree in Harmony of music from the Greek Conservatory both with honors, accompanied by a prize and money award.  In 1950 he was granted a scholarship by the Italian government to attend high perfection sessions for four academic periods in ACADEMIA CHIGIANA  SIENNA, taught by Andres Segovia. In addition, in the years between 1960- 1961, after Segovia’s personal invitation and having received a scholarship from the Spanish government, he attends Segovia’s Academic classes in MUSICA EN COMPOSTELA  in Santiago Spain.
Miliaresis is the first Greek guitarist to have completed serious studies abroad in Segovia school, also the first student and vehicle of this school in Greece. So he became the initiator and founder of the classical guitar school in Greece. He inaugurated Greek music literature of the guitar.
From 1944 to 1981 he performs as soloist in recitals in Greece and abroad. In 1960 he performed as soloist with the symphonic orchestra of the National Radio Foundation conducted by Vyron Kolasis in the concert of M. Castelnuovo Tedesco for  guitar and orchestra. He reperformed it in 1963 in the Central theatre with the ‘little Athens Orchestra’ conducted by Stelios Kafandaris.
He took part in all the “Contemporary music weeks” and in many first performances of chamber music composed by Greek composers. He was  professor in the Public Conservatory of Larissa  from 1947-1950,  the Greek Conservatory of Athens 1950-1978,  the Orfeon Conservatory, the American Girls College 1970-1978, and  his own Private school from 1977-1991. For many years, he collaborated with the National Theatre and with many groups of the Independent theatre in the performance and supervision of theatre music. In 1962 he collaborated with the National Theatre of Northern Greece in the Fillipon and Thasou festival, and performed the music accompaniment of an ancient tragedy as soloist,  played on a guitar of the ancient Greek type. He also performed guitar solos in many Greek short and full- length films and composed music for the cinema. He arranged works of Greek and International composers. He elaborated and arranged folk music both Greek and foreign . He composed music for the guitar and wrote educational books that were published in Greece. He gave many speeches on the guitar and music in general which were later published in various magazines. He recorded albums with classical and Greek music as well as his own compositions. His arrangements and compositions were published in Greece and abroad and have been played in recitals and albums by younger guitarists.
He was appointed president of the Greek National Council of Unesco from 1991-1998 when he resigned. In this capacity  in 1992, he modified article  number 5   of the  National Council of Music constitution, on members, and this way he broadened its formation with new members ( Legal Persons of Public and Private Justice) and not Physical persons which was the standard practice until then.
It was then that the greatest and most historically important music associations and foundations responded to the National’s Music Council call , demonstrating thus the old wish of the Greek musicians to get together which   had also been the idea behind the broadening  of the National Music Council which was visualized and realized by Ger. Miliaresis. In the same capacity as president of the N.C of UNESCO he put forward proposals before the committee of the International Council of Music within its general Assembly, in 1991 in Bonn and in 1993 in Alicante. These proposals were favourably accepted and warmly welcomed   by the committee.
In 1998 as a member of the guitar board of examiners during the Students’ Music Contest , he made an announcement before the young guitarists on the character and  the origin of the guitar and on the Greek Music Sound as well.  The announcement was published twice by the Ministry of Education for the purposes of the Contest.
He also wrote thoughts, ideas and memoirs.